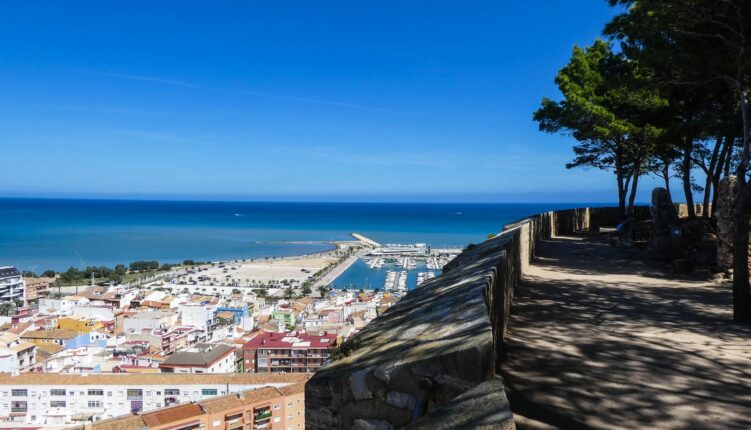 Capital of the Marina Alta and designated in 2015 as “Creative City of Gastronomy” by UNESCO, Dénia is a cosmopolitan, diverse and modern city that offers all kinds of services. Due to its Tourism, it is considered a destination of great interest, both for its tourist rental offers (www.carlosferien.info), and for the high quality of its products. The commercial life of the city takes place around Calle Marqués de Campo and the other adjacent streets.
Dénia has about 20 km. of coast, in which its beaches stand out: To the north, the area of ​​Las Marinas with the beaches of Punta del Raset, Les Marines, Les Bovetes, Els Molins, L’Almadrava (with area of ​​boulders) and les Deveses. On the south coast, the area of ​​Las Rotas with the Marineta Cassiana beach (sandy) and the rocky coves of Les Rotes, of great beauty, such as El Trampolí, La Punta Negra, Les Arenetes and La Cala.
Dénia maintains a very close relationship with its sea, due to the important fishing activity, whose most significant product is the famous Red Prawn. UNESCO itself recognizes Dénia as the city of origin of the Red Gamba, which competes alongside the Palamós shrimp as the best in the country. Equally relevant is its shipping industry, with the presence of Balearia, a maritime transport company that carries out the regular journey of goods and passengers to the Balearic Islands (Mallorca, Ibiza and Formentera). Another of its most characteristic elements is the Montgó Natural Park that separates the limits between Dénia and Jávea and with Cabo San Antonio as the natural boundary. The monuments of Dénia, its cultural activities and its museums, make up a rich cultural offer of a high level. Its festivities include the festival of the Virgin of the Helpless on the second Sunday of May (patron saint of sailors), the “Festa Major” during the first fortnight of July with the “Bous a la mar” declared a Festival of Interest. National Tourist and the “Parade of Floats” (declared a Festival of Provincial Tourist Interest), as well as the “Fallas” from March 15 to 19 and “Moros y Cristianos” from August 13 to 16.
In short, Denia offers tourism of the highest quality and high purchasing power capable of giving you a few days of true tranquility, distraction and privacy, always accompanied by a gastronomy of recognized international prestige.
If you want to visit us, contact us directly at www.carlosferien.info and we will offer you the tourist accommodation that best suits your needs.

How to buy a property in Spain?